What does it mean to produce a podcast? The Pod Bible gang wanted to bring podcast producers out from their editing bays and research caves to tell you why they’re passionate about creating podcasts and what a producer actually does. Without further ado, we’d like you to Meet the Producer – Holly Fisher, Episode 4 “Zandra Rhodes” of The Last Bohemians.

…always be prepared but be open to surprise and ready to change the story!”

Pod Bible: What appealed to you about this project?
Holly Fisher: I was already a fan of The Last Bohemians and these brilliant characters who were featured on it. Interview podcasts are ten a penny these days but this one really stood out for telling inspiring stories of women who haven’t always played by the rules, through a fascinating cast, thoughtful questions by Kate and some really lovely production by the team she had employed. I thought it was a refreshing take on the one-on-one interview format that so many podcasts are based on, and it made them much more memorable too; each episode has an individual personality – through voice, setting and producer. Kate takes a step back in TLB and really lets the voices of her interviewees sing. You can feel the time, effort and consideration that has been put into each episode. So I was really thrilled when she asked me to come on board for series 2.

PB: What does a producer need to consider when tasked with a single episode of a larger series, versus an entire series?
HF: You have to consider the tone and the themes of the series as a whole. The title is ‘The Last Bohemians’, so you have to think about how your subject fits into that and what stories you want to draw out of their life to follow that narrative. Having the same presenter throughout helps to bring the series together, and I worked really closely with Kate who, of course, has the main vision for the series. I re-listened to some of the past episodes when I was brought onto the project to get into the rhythm and see how other producers brought out the subtleties of these women through sound. Some episodes are thoughtful and slow, and others zip through rip-roaring stories – so that helped to think about how I wanted to represent Zandra in this context. Then there is the technical stuff like putting the final gloss on a programme; we’re all recording on different equipment and editing in different software, so you have to think about things like compressors, final levels etc so that episode 2 isn’t five times louder than episode 1, which could be an assault on the ears of a binge-listener! 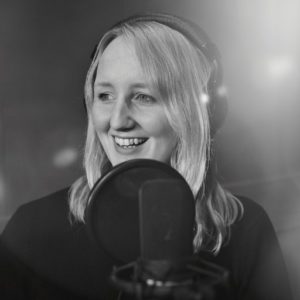 PB: How do you strike a balance between the right amount of preparation and allowing for “happy accidents” in an episode?
HF: To prepare for this interview I read, watched and listened to tonnes of interviews with Zandra. I quickly recognised the stories that had been told time and time again and knew which bits we could skim over to find out something new about her. There are so many different facets to her career – design, punk, disco, royalty, travel, famous friends – so we came up with a list of topics we wanted to know more about and tugged at each thread until we found a few things we could run with. You have to be prepared in order to find the new story but it often comes from spending time in the interviewee’s environment, and that’s one of the other great things about this podcast: it always takes place in their homes, which can reveal so much more than in a studio setting. In our case spending two separate sessions with Zandra in her rainbow apartment – while people were working around her – revealed a lot about where she’s at in life and how she approaches her work, and it provided some unexpected interruptions, which formed the structure of the episode. I certainly didn’t get what I expected out of her – but it made me think differently about what ‘bohemian’ means. So I would say always be prepared but be open to surprise and ready to change the story! Let the interviewee lead you into their world.

PB: Were there any aspects of what you heard in Series 1 that you kept in mind for your episode, or did you try to avoid letting what previous producers did influence your work?
HF: I definitely took something from listening back to the first series – the rhythm, pacing, etc. I think you have to be informed by what’s come before to an extent so that you can work within the tone and the texture of the series. But comparing your work and changing it based on previous episodes could alter the timbre of your story and characteristics of your subject. The key thing about this series is that every episode sounds really original, so adopting the voice or style of another episode wouldn’t necessarily work in your favour. You want to be transported into the worlds of these vibrant and unique women and so you have to reflect that sonically.

Holly’s episode of The Last Bohemians launches on April 6th.

Thank you for subscribing.

In the Podcast Disciple section of Issue #009, we