For some projects that are popular on a national level, podcasts can help reach a new, international audience. Stories from the Stage is such a project: the broadcast series from WORLD Channel (a national multicast platform dedicated to increasing diversity for public media audiences in the United States) features storytellers – some experienced, some amateurs – telling memorable true stories, and has already proved award-winning nationally.

Now, Liz Cheng and Patricia Alvarado Núñez (who co-created the series with Editorial Manager Chris Hastings) host and executive produce Stories from the Stage: The Podcast, based on the original broadcast series. It allow listeners to hear entire episodes of the original series as they appeared during their original television broadcasts, but it also provides bonus “behind-the-scenes” narratives and extras not included in the Stories from the Stage on-air broadcasts.

We caught up with Liz and Patricia to talk about creating the podcast series, representation, and which podcasts inspire them…

Can you introduce yourselves to the readers?

Liz Cheng: Early in my career as a print and video journalist/producer, I gravitated to the stories of individuals, caught in the headlines, who illustrated the unfortunate pressure points in America, and yet, were determined to prevail. I was especially drawn to those who embodied all the ‘differences’ that make a difference. You see, my parents emigrated from China after World War II at a time when our country thought every Asian was the enemy, so it was difficult for them to find jobs, despite having advanced degrees, and it was years until they eventually became U.S. citizens. As a result, I found myself focusing on fellow multiculturals — filmmakers, storytellers and subjects/people with diverse backgrounds, differing orientation and often challenging circumstances —who like all of us just want a safe and sustainable place in the world for themselves, the people they love and their community. Thanks to our talented staff, WORLD has evolved from a service that merely repeated the best in PBS non-fiction content to now commissioning and curating original films and storytelling with widely diverse perspectives and memorable situations – in essence, people reporting from the heart of their own multicultural communities.

Patricia Alvarado Núñez: Growing up in Panama and working at its public television station, I had always dreamed of studying in Boston and working at the powerhouse public media producer, GBH. I was fortunate to secure an internship with La Plaza, a GBH series dedicated to examining issues affecting Latino communities throughout the United States. Following my internship, I had the opportunity to produce different projects, including a documentary about Fidel Castro for the PBS series American Experience, a national studio-based series called Maria Hinojosa: One-on-One and Neighborhood Kitchens, a regional multicultural food series. I hope all my projects give people a glimpse into the diverse communities that make up our country. For this series, we have created a welcoming stage accessible to people from across the nation and around the world — of all ages, genders and ethnic backgrounds as well as those from rural and urban areas. When we create a safe place for people and their stories, we make space for empathy and a way for all of us to connect with a shared humanity.

What drew you to this project?

Patricia: Stories from the Stage is a dream project for me. I grew up hearing stories, mainly from my aunts and my dad in our childhood home. So, while I’ve always enjoyed the art of storytelling, I never dreamed that such stories could appeal to a wider audience. We love to help people find their voice because everyone has a story to tell. Some say telling a story on stage in front of strangers is simple, but it is not, even if you are an experienced speaker, actor, writer or stand-up comic. Liz, Director and Editor Michael Rossi, Curator and Story Coach Cheryl Hamilton, and I are grateful to our storytellers for allowing us to work with them on honing their performances, as they prepare to share the best and worst moments of their lives. Sometimes storytellers think they are ready to go on stage when they are not, so we gently invite them to return another time.

There are many reasons why tellers volunteer to do what they do: the time needed to process and publicly recognize something significant that happened to them as well as the opportunity to connect with strangers, impart insight about personal experiences and help others on their journey through life. Plus, it’s an amazing adrenaline rush – until you are up on stage, you can’t imagine the energy, excitement and feeling of accomplishment.

Liz: I believe a memorable story, heard at the right time, can transform a person. These are quintessential American stories from people whose families often originated from other countries. You can be emotionally uplifted by someone who might seem, at first, very different from you: a penniless young Black refugee from civil war in the Democratic Republic of the Congo trying to pursue an education in the U.S.; a woman with alopecia who redefines beauty for her two young daughters; or a man, whose family fled the Holocaust, learning to come to terms with tremendous loss.  These stories can inspire empathy, action and even incite social change — it is an art form that dares to take a stand. The primal act of sharing a story is a wonderful communal experience — we can learn together through laughter, tears — and cheers!  We endeavor to move beyond  understanding in order to celebrate our differences.

What do you have to consider when making a podcast as a companion to a TV series?

Patricia: For the podcast — as a major departure from broadcast — we can reveal the thinking and expand the timeline driving this incredibly rewarding work. Liz and I share behind-the-scenes information, including what happens after a performance. For example, on stage, a mother describes rescuing her young daughter from an oxycodone house; a year later, did the daughter stay drug-free and what did she think about her story being told publicly? Often, post-performance, long-lost friends, family and those involved in a story reach out to tellers after decades of no contact. These important details add layers to a story that is already extremely impactful.

Liz: Patricia and I discuss why we choose certain storytellers and how three stories connected together can make an inspiring statement about fighting for a cause, surviving a hilarious set of circumstances, triumphing over disaster, and even finding redemption. Unlike our broadcast series — we can also talk about how we identify with tellers and their stories. After all, we’re not made of stone! If we are filled with a sense of wonder or a particular story hits home, we talk about the connections to our personal lives. The podcast allows amazing stories – for the first time — to be enjoyed by all of you outside the United States.

Are there any podcasts you draw inspiration from?

Liz: I love so many podcasts that provide daily news, political analysis, storytelling, humor and deep dives into science, history, the arts or social justice issues.  Walking the dog on weekends, I like to listen to Code Switch, Hidden Brain, On the Media, and Wait, Wait Don’t Tell Me!

We like to give our listeners a point of entry to series – would you say there’s a particular episode that’s a must listen?

Patricia:  It is hard to choose among so many storytellers who have inspired and entertained us. Below is a sampling of episodes we have listened to again and again and have turned out to be fan favorites in the U.S. Enjoy!

Valerie Tutson introduces her disbelieving Black students to one of the world’s greatest explorers from Africa; and as a young girl at a predominantly Black school in Chicago, Angie Chatman has a chance encounter with a police officer she will never forget. Listen now >>

Ashley Rose’s beloved multicultural neighborhood in Boston was destroyed by a man-made disaster; years later, she takes us back there to explore how this traumatic event turned her into a crusader for others. Listen now >>

Teacher and artist Annemarie Whilton describes her daughter Sarah’s descent into substance misuse disorder and her dramatic rescue from a drug den. Mother and daughter have a conversation with us about the challenging journey toward recovery. Listen now >>

Where can our readers find out more about you? 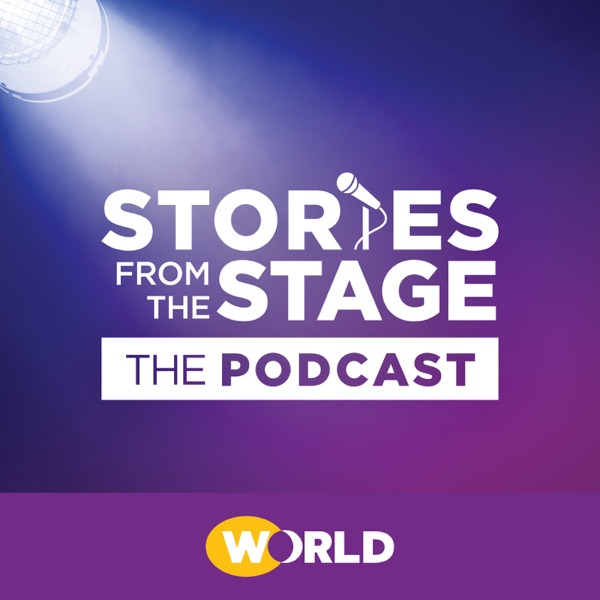 Listen to Stories From The Stage now on worldchannel.org, Apple Podcasts, Spotify and other popular podcast apps.

Patricia Alvarado Núñez is an executive producer at GBH Boston.

Liz is the general manager of television for GBH’s six channels in the station’s local Boston, Massachusetts, area and for the U.S. 24/7 digital service, WORLD Channel, which is available in markets representing nearly 75% of U.S. television households.

OPINION // Producers should be issued with a ban:

Our Pod Bible Issue #023 Playlist is now on Spotif

POD BIBLE PODCAST #117 OUT NOW! We speak to Luisa

Pod Bible #021 featuring @mrbrettgoldstein is OUT

It's International Podcast Day and we want to know

It’s #InternationalPodcastDay! To celebrate, we

HAVE YOU HEARD? // Before The Lights: Personal tra

The brand new Pod Bible magazine is out THIS SUNDA

Our Oh My Pod section in Issue #022 showcases the

Before The Lights: Personal trainers chat with their celebrity clients