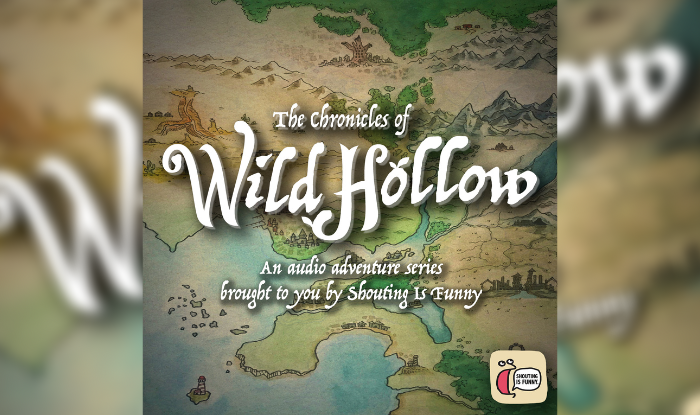 Have You Heard? is where the Pod Bible team meet the people behind the podcasts you may not have heard of yet. The Chronicles of Wild Hollow is an award-winning fiction podcast from indy company Shouting Is Funny. It gives listeners adventure, comedy, talking animals and catchy songs. We spoke to creators Christian, Harvey and Angus to find out all about it…

Who are you and what’s your podcast about?

We are Shouting Is Funny, an independent audio production company based in London, UK. The company consists of Christian Powlesland, Harvey Badger and Angus Maxwell – three friends who joined forces when we met on the Actor-Musicianship BA course at Rose Bruford College. We make the musical fantasy adventure series The Chronicles of Wild Hollow – a mix of epic set-piece drama, oddball comedy, cinematic orchestral score, original songs… and a significant amount of talking animals.

Our show takes place in the fantasy world of Wild Hollow, and we put out our episodes in trilogy form. We have two major releases so far. Firstly, we have ’The Boursin Trilogy’, following mouse/bounty hunter Fandango Boursin on various high-octane jobs, whilst unknowingly being drawn deeper and deeper into a conspiracy that spans across all of Wild Hollow… And then there’s ’The Gray Trilogy’, where we follow fox/smuggler Artemis Gray on a piratey voyage in search of an ancient nautical treasure, in the hope of discovering her mysterious truth…

A third trilogy is currently in development, and well as a series of Wild Hollow Shorts that give more insight into the lives of our weird and wacky secondary characters!

What was the first podcast you ever listened to?

Angus’s first foray into podcasts was If I Were You, hosted by Jake Hurwitz and Amir Blumenfeld. Their satirical, comedic approach to discussing anything and everything really spoke to his sense of humour.

Harvey’s first pod was Song Exploder, hosted by Hrishikesh Hirway. Harvey is a singer-songwriter in his own right, and took an immediate interest in the dissection and analysis of some of the world’s greatest songs.

So it’s not really surprising that now we’ve come to making our own show, it heavily leans into satire, comedy, storytelling and music. Wild Hollow takes elements of all three of these shows, for sure.

Why did you decide to start podcasting in the first place?

Well, back in our days of training at Bruford, we stumbled across the format of audio fiction fairly early on. Christian had a microphone and a bit of a home studio set up, and we all shared a similar sense of humour and an urge to create original content in some form or other. So we combined the two and found ourselves recording (admittedly pretty terrible) improvised tales into a mic in Christian’s dorm room and sticking them on YouTube.

During our training, we had a module focused on radio, which is where we really started to understand more about the medium and where we could take our work. The marvellous Jeremy Mortimer gave us some invaluable preliminary tools, alongside our ’throw enough stuff at a wall and see what sticks’ origins.

And then came the Rona. We were set to graduate from our course in Summer 2020, and Covid demolished any chance of a smooth transition into the creative industry. BUT, without it, we don’t think Shouting Is Funny would have materialised. Or at least, not at the rate it has done. We were all desperate for some kind of creative output during lockdowns, and so we decided to attempt a from-isolation approach to making an audio fiction show. And that show evolved into The Chronicles of Wild Hollow.

Which podcasts do you take inspiration from?

Admittedly, we weren’t hugely clued up on the fiction podcast scene when we began. We were more inspired by audiobooks and dramas we’d grown up with. However, when we decided we wanted to make a comedy audio drama, we very quickly discovered the excellent Wooden Overcoats. When we started going down the fantasy route, Angus started to draw some parallels from Not Another D&D Podcast. And we are all musicians, and wanted to infuse music and song into our show – The Fall of the House of Sunshine presented itself in a glorious google search. We like to think of Wild Hollow as a unique entity, but there are definitely inspirations from a variety of sources.

Who’s your dream guest for the podcast?

So obviously being a scripted, fictional podcast, we don’t have the opportunity to invite guests onto the show in the traditional sense. But there are some voices that we would love to feature in our show. Bob Mortimer is a man who we all just crease up listening to – he’s a comedy legend and we’d write pretty much whatever character he wanted if he was to get on board. If anyone knows Bob, we’re up for a chat.

And recently we were lucky enough to attend the BBC Audio Drama Awards 2022, where we discovered the wonderful Bridget Christie. She was awarded Best Scripted Comedy (Longform) for her show Mortal, and her acceptance speech alone made us want to get her on the show.

What’s the biggest lesson you’ve learnt so far as a podcaster?

Don’t rush. And maybe, given the fact we’ve released 7 episodes in 18 months, we could do with not taking our own advice. But realistically, we wouldn’t have been able to put out the episodes to a standard we were truly proud of unless we took the necessary time. Wild Hollow is scripted, and heavily sound-designed, featuring a full cast of wonderful actors and original songs and score left right and centre. Plus, a plethora of original artwork to accompany our characters, scene locations and episode cover arts. The amount of work that goes into this show is mammoth, and giving ourselves the time to achieve it all is necessary. We started with grand plans for new episodes every few months, but making the decision to pace ourselves (and not gauge our successes vs other shows in the community) was formative in our creative process. It’ll be ready when it’s ready!

Also, give your characters funny names. Funny names are great.

Which episode would you say is the perfect introduction to your podcast?

’The Gray Trilogy – Episode One: A Smuggler’s Honour’. That’s the first of our three new releases, it introduces brand new characters, locations and it’s a great place for new listeners to jump in and get a taste of what we do. There’s definitely links to The Boursin Trilogy that a new listener would miss, so if you’re a completionist, maybe you’d want to start with Fandango’s trilogy opener ‘Fandango Boursin and the Lilypad Lounge’. But ‘A Smuggler’s Honour’ would be our recommendation – immerse yourself in Artemis’s journey, then pop back and see what Fandango gets up to. And then, if you’re feeling festive, we have a Christmassy adventure featuring our mousey bounty hunter as well – our very first release back in 2020.

Where can the Pod Bible readers find out more about you?

Where CAN’T they. You can find the show on Apple Podcasts, Spotify Podcasts, Audible, or wherever you get your podcasts. We’re active on Instagram, Facebook and Twitter @shoutingisfunny. We have a company website at www.shoutingisfunny.com, where you’ll find insights into our current and future projects. You can directly support our ongoing work via our Patreon at www.patreon.com/shoutingisfunny. And, if you’re part of the r/audiodrama or r/podcasts subreddits, you can find us squirrelling away on there as well. 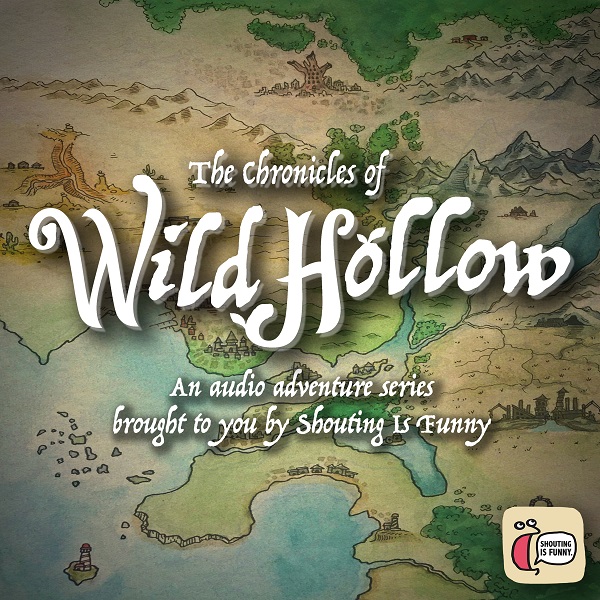 Listen to Chronicles of Wild Hollow on Apple Podcasts, Spotify and other popular podcast apps.

More in HAVE YOU HEARD?

The brand new Pod Bible magazine is out right now!

On this weeks Pod Bible Podcast @scroobiuspipyo to

Pod Bible #022 featuring @kermodeandmayo is out no

To celebrate the launch of the brand new Pod Bible

HAVE YOU HEARD? // Teaching My Friend Nutrition: N

Who belongs in the podcast hall of fame? Comment b

NEW ARTICLE // 5 Quick and easy ways to improve yo

INTERVIEW // Tell Me About It: Learn about the fas

OVERHEARD IN THE STUDIO // Sustainability, homewar

Issue #022 of Pod Bible is out THIS SUNDAY featuri

Pod Bible Podcast – Tell Me About It