As the festival draws near, we caught up with Founder, Dylan Pugh, to find out what we can expect at the festival this year…

It’s nearly festival time! Which shows are you most excited about seeing in this inaugural year?

They’re all going to be great shows obviously, but two in particular stand out for me. We have Morning Kombat, the leading MMA/Boxing podcast in the US and reigning Sports Podcast of the Year, flying over to play their first live show in the UK. They have a huge audience over here, and great guests lined-up, so that will be a great one.

And the FozCast will also be playing their first ever live show too, which is really exciting. I’ve been a huge fan of the way Ben Foster has built his own audience as a content creator – and he’s bloody good at it too! We’re excited for his fans to be able to watch the FozCast live in-person for the first time.

You mentioned some predictions for Sports podcasting in 2022 last time we spoke (more immediate content, the rise of the ex-professional, keeping episodes short and regular) – did we see it all happen?

We definitely saw more ex-athletes launch a podcast this year, from Jonny Wilkinson and Andrew “Beef” Johnston, to Neil Warnock and Chris Kamara. I would expect that trend to continue in 2023, with more current athletes in their prime joining the party.

Any things about 2022 podcasting that surprised you?

We didn’t see as much growth in the live audio space as I was expecting. Facebook flirted with it, but cooled their plans, Twitter Spaces has not been as widely adopted, and Spotify’s plans with Greenroom are yet to materialise at scale. In the same space, we saw more live-streaming and watch-alongs from leading sports podcasters – another trend I expect to continue to grow this year. And I was surprised by how quickly the live podcasting scene has not only returned post-Covid, but accelerated at such pace.

What are your predictions for sports podcasting in the next 12 months?

More current athletes in their prime to enter the game as podcasters, more sports podcasts going live and on tour, and in general, I think we’ll see some more variation in the types of podcast being created – niche topics and different formats. There’s clearly a formula that works for sports podcasting at the moment and I can see why people are sticking to that, but my opinion is that there’s now a lot of repetition. Those that do something different to the norm will cut through

Both the audio industry and the sports industry have a big gender disparity – do you think podcasts could help to engage these audiences?

Absolutely. There’s huge momentum around women’s sport right now and the growth trajectory is significant. To my earlier point, the sports podcast landscape is very ‘samey’ in terms of the format and profile of the hosts – and the gender disparity is shocking. So as women’s sport continues to grow in popularity, there’s a huge opportunity to add some fresh new voices to the space.

There’s already some amazing podcasts such as the No Balls: The Cricket Podcast, The Good, the Scaz & the Rugby and Jill Scott’s Coffee Club, and from our work with the Sports Podcast Awards, we are seeing more female producers out there too, which is great to see.

TV has made big strides in the number of female voices in sport, but these are not the current athletes and top stars themselves. Podcasts can be an amazing platform to showcase their true personalities and to build these characters and role models to inspire the next generation of female sport stars and audio creators.

I would urge anybody that commissions a sports podcast to think about the opportunity here, and the responsibility that we have as an industry to redress this balance.

For those interested in attending a live sports podcast show, how can they get involved with Pod Live?

We have live shows each night from Wednesday 8th to Sunday 12th February at Kings Place in London. There are two shows each night, with four on the Sunday, and tickets can be bought HERE. We have shows covering Rugby, Football, Cycling, F1, Combat Sports and some general sports comedy shows like Fighting Talk and Socially Distant Sports Bar – so something for everyone! 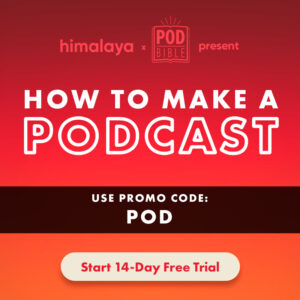